The genesis of this hat pattern is pretty straightforward: I had yarn leftover from the Crossed Furrows Cowl. It used three colours, but one of them had more of a supporting role and the third really only had a cameo.

I started wondering how to use up that leftover yarn and how to do the plaid stitch in the round, and suddenly I knew what to do with the leftovers. I would make a hat.

Except that it wasn’t just one hat. I started wondering some more, and a two-colour version also sprang into being. And then a tester wondered about turning it into a slouchy hat, and suddenly two hats became four!

Presenting the Crossed Furrows Hat to use up the leftovers of the cowl, or any aran yarn you desire. Sized from Baby to Adult Large.

Use the code ‘staywarm’ at checkout to get 25% off until Sept 7. I’ve also made a little bundle of the two matching patterns – you get both for $6.50 rather than $8. It’s automatic, so if you’ve already purchased the cowl, you’ll get the discount too – and this deal doesn’t expire!

On a personal note, I was pretty excited to convince my mom to model with me!  We had a great time, and it made it a real family affair. Dad had taken the original photo of the crossed furrows, Mom was modelling with me, and my daughter Sandra was behind the camera for the photo shoot. She helped us stay very serious and focused.

About to be released…two, yes two, hat patterns to use up the leftovers from the Crossed Furrows Cowl pattern!  There’s a two colour version and a three colour version.  The sizes go from baby to large adult.

I convinced my mom to help me model the hats, but as you can see, we couldn’t stay serious the whole time.

It’s been a while since I entered this as one of the two patterns I submitted to the DesignAlong contest.  In the meantime, I’ve learned a lot about designing, about working with test knitters, about how to load things into Ravelry.  And now I have this pattern to present to you, tech edited and test knit, ready to fascinate your needles right now and be ready before the chill winds of autumn arrive.

Until August 5th it’s 25% off to celebrate. There’s no code, the shopping cart will enter it automatically.

I wore it all winter and it kept me warm and made me happy.  I wanted wearability and warmth so it’s knit in Cascade Superwash Aran.   It’s a deep, warm cowl which features a simple, reversible texture pattern separated from a garter stitch section by a crisp line. It has a tidy slip-stitch edging and a nearly invisible join.  The cowl is knit side-to-side and the ends are grafted together. Full instructions for grafting in garter stitch are given in the pattern.  You could go with a three-needle bind off if seams don’t bother you, but why be intimidated by the grafting?  It’s simple and you can wear it any old way without worry if there isn’t a seam.

When I travel, I love to watch the textures of the landscape change.  Maybe it’s the prairie girl in me – the textures of the fields and the big skies are the main attractions here. It’s like my eye is set to macro – I’ll miss a cathedral because I’m looking at brickwork.  I’ll have my eye on the jagged edge of a leaf and nearly miss the flower.  I especially love it when textures meet or overlap. This cowl’s structure was inspired by Germany’s sidewalks.   I really enjoy the many ways that rough cobblestone can be found next to bricks and intersected by a smooth line of concrete.

Sandra, my sister Katie, and I had a blast dyeing gradients this weekend using this tutorial. We used Jacquard acid dyes instead of Koolaid.

It was a bit fiddly to wind the wet yarn into a hank to dry as the yarn was very much inclined to stick to itself and knot up. But I have more time than money and this was a great way to get a gradient like those I see online.

Crossed Furrows Cowl is now out! I’ll try to keep the use of exclamation marks to a reasonable number. Since I am so excited, though, I’ve used ‘happy’ as a coupon code for 50% off. (Lasts until May 22.)

Knit in aran weight yarn, it’s easier than it looks.  You’ll need three colours, but you only use one per row.  There’s a link to a one-row buttonhole tutorial that I filmed, as well, so this pattern is very beginner-friendly.  In fact, the skills used in this pattern are:

Here’s the picture of a field of emerging plants that my father took and which inspired the colours I wanted to use in this cowl.  My furrows may not cross – the slipped stitches behave in an orderly fashion – but I just had to use the reference in the name.

Big Happy Thanks to:

Jeni Hewlett of Fyberspates Yarns for providing the yarn used.  Scrumptious lives up to its name and has an incredible balance between the soft wool and the silk.  I have very sensitive skin, and this yarn feels fantastic even on my neck.

Thanks also go to A Playful Day Podcast host Kate, who was the creative force behind the DesignAlong contest.

Another Kate, Kate Atherley of Knitty.com among other things, was the tech editor.  I like to think that my editing skills are pretty sharp, but that’s for English, not for knittish.  It’s amazing what she could do to catch errors and smooth phrasing to make the pattern more knit-able.

That, my friends, is my logo!  And my business name.

The plaid cowl – soon to have a new and official name – is nearly ready.

I have a few rows left to knit of the sample, and the new silver that Jenni of Fyberspates sent is doing delicious things with the green and slate colours.

I’ve even got a guest post coming today over at A Playful Day.  It’s a little bit of a behind the scenes look at the process so far and I hope you enjoy reading it.

Thinking I’ve got this. Learning it’s surprisingly difficult to pick up how layers of colours will interact. Riotously happy every step of the way.

I started with this Oatmeal colour of Berocco Vintage.  It was a colour I ordered online and it wasn’t at all what I’d hoped it would be.  Every other oatmeal from a yarn company I’d seen looked far paler (like oats) while this was a weirdly warm beige in person.  It’s an acrylic wool blend, and I wasn’t sure how well it would overdye.  But I got the itch and threw it in with some KoolAid over lunch yesterday. 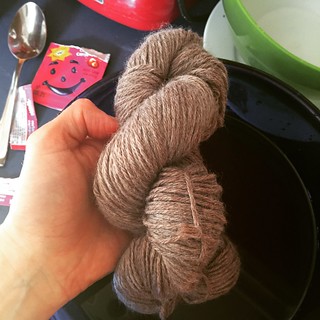 First I soaked it, then skeined it up and microwaved it with 2 packages of cherry. 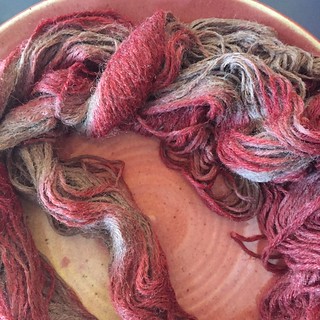 It looked like it had gone all the way through while it was cooking, but I was totally fooled and the insides were still the original colour. 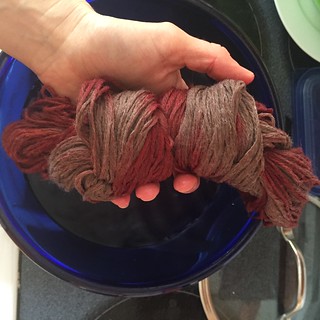 Once it was cool, I put two slip knots in it and tossed it in with a package of orange.

Unfortunately, I didn’t get a picture of that result.  I had a great mix of cherry and orange, but enough of the original survived and just didn’t look right with the tones of the dye.  So I opened it up and put in a package of cherry to give the whole thing a unifying colour.  In retrospect I ought to have tried a half package, since I lost the orange except as an undertone that still looks lovely. 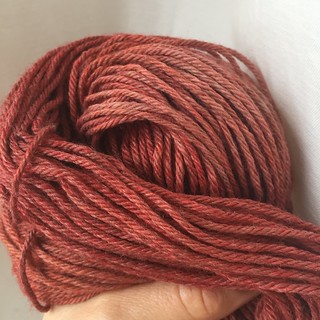 It turned out a beautiful, soft, autumnal colour.  I’m browsing patterns for about 200m (220 yds) of worsted weight if you have any suggestions.

I finished a sweater, the kind of sweater I’ve been craving all winter long.  September Morn by Thea Colman.

I made a few changes: knitting it at the same gauge but in sport weight rather than worsted; I carried the ribbing all the way down the sleeves because while stopping it looked great in her version many of the versions looked oddly goofy at the transition; and I carried the ribbing detail from the raglan into the body for a ‘seam’.

My collar won’t do ‘cowl’, it’s just a turtleneck.  I’m not certain why that is.  I did follow the directions and I also made certain to block the top half wider.

I’m really pleased.  And the blizzard this week meant that, as usual, March isn’t too late for finishing sweaters around here.

Yesterday I wrote about choosing colours for the plaid cowl.  As promised, I’m going to discuss the hiccup I encountered when it turned out that colours had played tricks with my eyes when I picked colours with Jeni.  Colour has such an emotional and psychological role in our lives that, even though I had done the swatches I shared with you yesterday, I managed to mess up.  I did not order one each of a light, medium, and dark tone.  Instead, I ended up with a dark and two mediums.

I had planned to do the cowl with a lovely and vibrant horizontal run of leaf green, but I had a feeling that wouldn’t work. I knew it was time to swatch.  And this project offers ample swatching opportunities.  With a main colour and two contrasting colours, there are 6 possible combinations. The contrast colours aren’t equally used, so there will be one that gets twice as much visual space on the cowl.  So, for example, using green as the main colour still leaves me with two options: dark grey as contrast colour 1 and blue as 2, or blue as CC1 and grey as CC2.

If you’re the type to love to play with swatches and enjoy the surprises they can bring, then have at it!  But if you’re looking for more guidance, the pattern gives advice, as does yesterday’s post.

This stitch pattern looks good a lot of ways but, if you’re like me, you’re a knitter who envies weavers the ability to produce plaid.  It’s why I starting playing around with the stitch pattern, after all.

So let’s look at the three swatches I did yesterday, with each of the three colours as the main colour.  For contrasting colours, I used the lightest colour as the one that would be the thinest.

On the left, the green works reasonably well, but there isn’t a strong sense of the crossing of colours.  It’s that crossing of a horizontal and a vertical that makes this stitch pattern mimic plaid.

With the middle swatch, the dark colour just steps back into the background, allowing the texture of the contrast colours to really move forward, which doesn’t work for the look I want at all.  It might be nice, but it’s not plaid.

On the right, we have the blue as the main colour, and the thin band of green seems to hold it’s own weight as a vertical accent.  It’s the one I like best, especially in person.

Why does this work?  After all, in the black and white photos I take of the three colours the blue and green are indistinguishable from each other!  But colour as a physical fact also gets layered with our emotions, our psychology, and our perceptions.  There is something about the way the green shimmers, especially in person (no doubt due to the amazingly glorious 50% silk content).  There is such energy to the green that it picks itself up and lifts itself lighter than the blue, as it were.  I’m so glad I didn’t have to write a sheepish note to Jeni of Fyberspates explaining that my psychology had overruled my swatching brain.